I am Todd Caldwell, the founder of Aegir Watches and am a commercial diver working mainly in the offshore Oil and Gas industry in the North Sea. In recent years it was mainly in the bell bounce system employed by Noordhoek Offshore. It was here I came up with the concept diver due to not being able to buy a watch meeting all the criteria that I wanted from a dive watch.

So it started in 2007 and there were some setbacks, including a diving accident on the 21st of June 2008 during a submarine salvage involving a large propeller and myself on the vessel we were diving from, that was supposedly shut down. It added 18 months to the project, but all in all I can’t complain as that day ended better than it started.
Originally it was designed as one off project for myself and my diving colleagues and sales were never the motivating factor. In fact, it was not even to be a company. But things evolve and Aegir certainly has, and a company it has become. The project became more ambitious and another model was added, the CD-2.

Aegir watches are German and Swiss made. Every component has been sourced from these two countries, with the occasional exception, such as the handmade in the United Kingdom, Metta Catherina leather straps.

Soprod A10, Swiss made automatic, 25 Jewels.

I love when a watch comes about that has a backstory of how and why it came about. Seeing the creator’s vision and inspiration is something that adds to coolness factor to the watch. “Ægir Watches CD-1 concept was born in the mid 90’s on a quay in Fort William Scotland, on a rainy summer’s day, but at the time I never realized it. It stayed in the back of my mind, and it was not until early 2007, that I decided on the design while waiting in the dive bell for the divers to return. And refined the idea over subsequent dives and many long hours of decompression before eventually handing it over to a designer.” 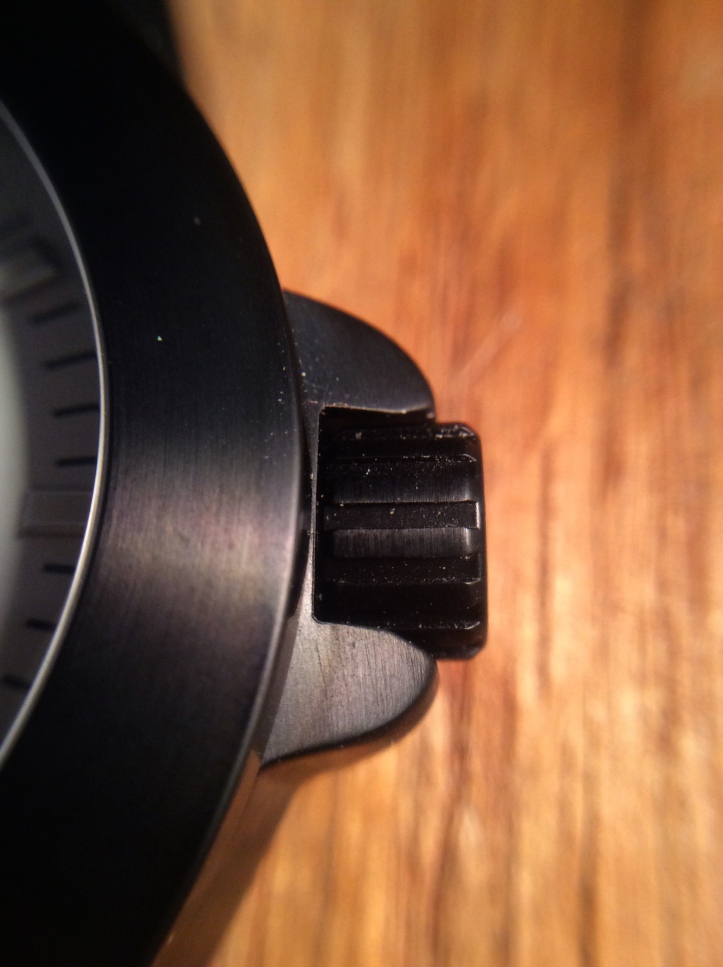 You have heard the saying “less is more” right? AEGIR takes this saying quite seriously and run with it when it comes to the CD-1 watch. No over the top unecessary embellishments here. A straight forward, no nonsense professional dive watch. When the CD-1 arrived for the review what struck me first was the black and white combo that’s going on here. An almost glowing white dial with a deep black DLC case. The finishing on the case is very nice. I typically prefer a brushed stainless steel case, but AEGIR knows how to pull off the DLC finish.

That is a common theme you will see throuout the CD-1, attention to meticulous finishing. Smooth and seamless would best describe the finishing on the CD-1. The crown guards flow out of this case with finesse. They are rounded pretty nice and remind me of a shark fin. They do a nice job of protecting the AE signed screw down crown. The crown operates as it should without flaw. One thing to notice is how long the crown stem is. The crown is easily gripped thanks to the wide grooves that encircle the gear styled crown. 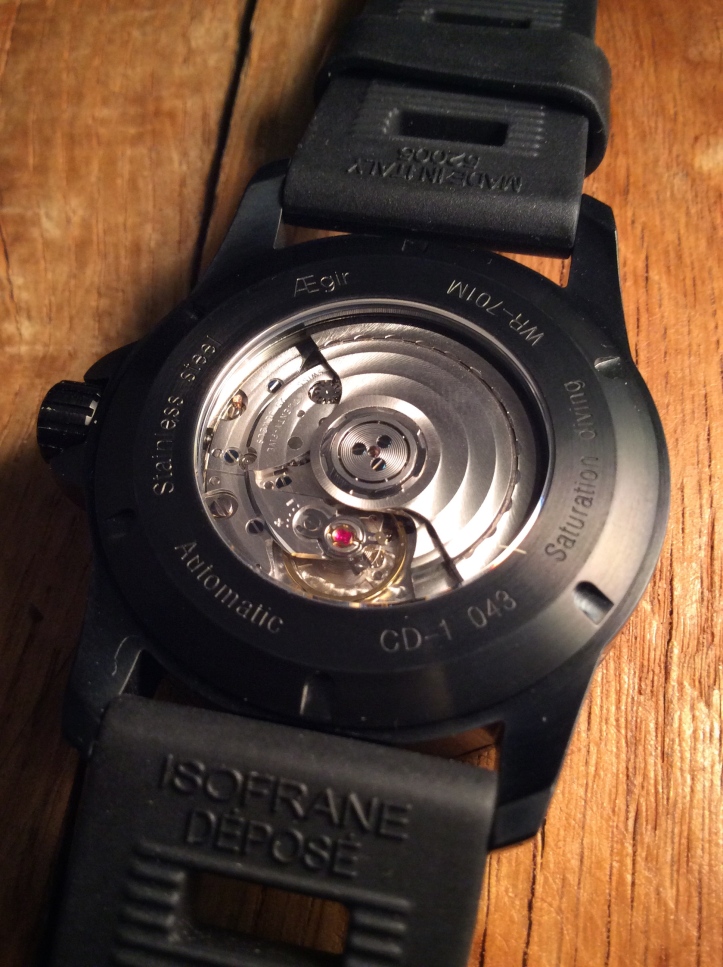 Now there are two things on the CD-1 that seem odd choices for a watch being labeled as a dive watch. One, is the sterile fixed bezel. It’s my personal experience that a unidirectional rotating bezel with a lumed triangle/pip/etc. is a must on a dive watch. Using it to mark the time entering the water or marking off how much time is left for oxygen in your tank. It’s a very usable and important addition for people who actually use their watches to dive with. The second detail that made me scratch my head is the exhibition case back. A detail I would expect to find on a dress style, ready for the office style of watch, not a tool/dive watch.

These two details are not deal breakers by any means. They are just two details that made me stop and think about them a bit in terms of being a dive watch. The drilled lugs with hexagon head screw ensure a great hold on your watch strap. Speaking of straps, the Isofrane strap that is included is killer. One of the best rubber dive straps out there. It is not only comfortable, but it is so dependable and will not fail you in the harshest of conditions when in the water or on land.

The dial is where the CD-1 really shines. The white dial is so ivory that it almost looks like it’s glowing. I’m a matte black dial guy all the way, but if I was going to go with a white dial, this would be it. If you are looking for a white dial, this is the watch you want. Seriously, I’ve never seen a nicer white dial on a watch. EVER. Even on watches that cost considerably more. The applied indices are equally as beautiful. An awesome large triangle marks the 12 o’clock hour and each hour is marked off with an applied rectangle. All but the 3 o’clock hour, which is a small square to allow room for the date window. The date window, along with the indices are lined with polished chrome which reflects light brilliantly. 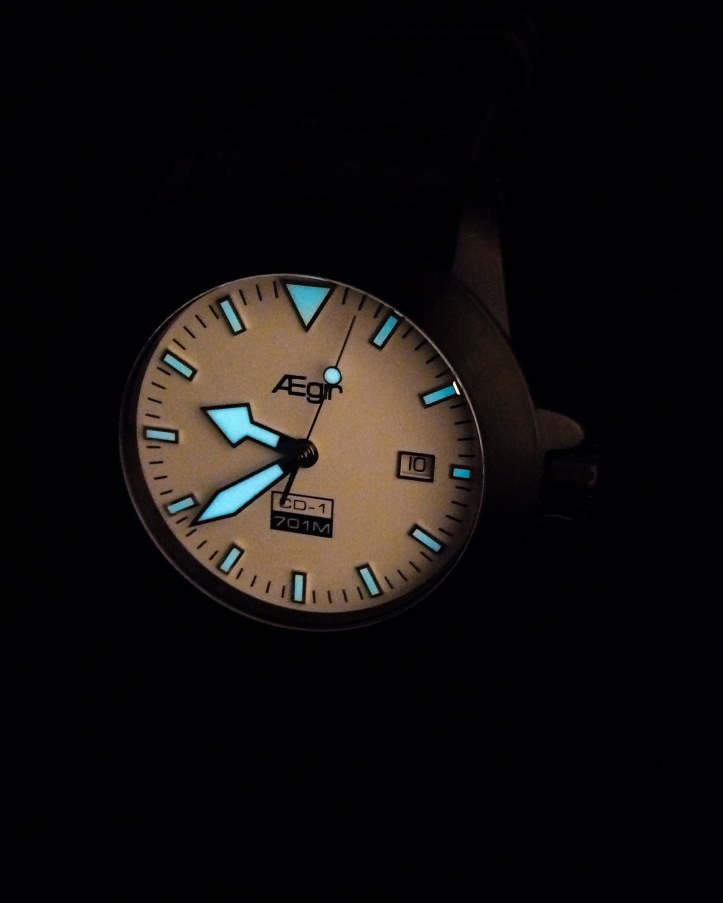 The hands on the CD-1 are undeniably awesome. The arrowhead hour hand is proportially thick to the rest of the dial. It’s a focal point of the CD-1 for sure. The minute hand shines on its own as well with a nice sword shape. The second hand features a lumed circle that really comes in handy for low lighting situations. The dial is extremely easy to read in all types of situations, from low lighting, murky water, extreme angles, etc.. This is thanks to the combination of the nice white dial and the lume that is found on the hands & indices. When fully charged this baby glows like a flashlight.

Printed on the dial is 701m which represents the water resistance. 701 is kind of an odd and precise water resistance. There’s a reason according to Todd “701M was chosen as the water resistance for all of our models, bringing about some awareness to commercial diving in the process and most of all in homage to the insanely heroic chamber dive of Theo Mavrostomos in 1992 breathing hydreliox, which holds the record for the deepest dive.” I love a good back story of why things are chosen. Chosen with purpose & reason, not just because.

The movement inside the CD-1 is the highly reliable Soprod A10. The Soprod is an excellent alternative to the ETA 2892. The A10 has a power reserve of 42 hours and is a 25 jeweled movement. During my review process the CD-1 was keeping +/-7 seconds which was recorded in various positions and environments. The A-10 held up with no problems whatsoever. I have had experience in the past with the A-10 and it’s a movement that I really like. 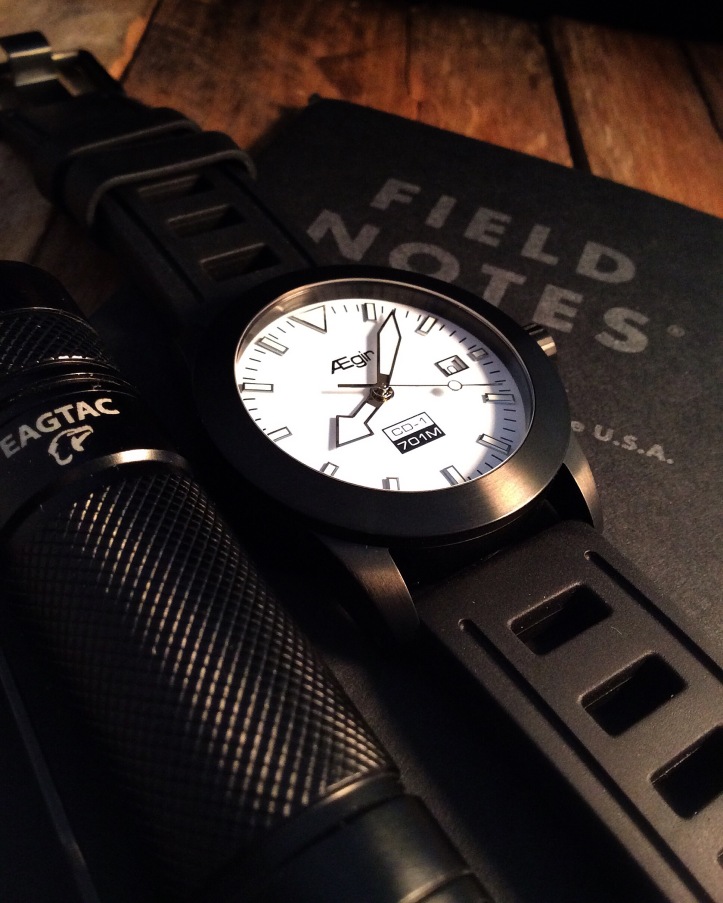 The CD-1 definitely achieves what it set out to do which is a watch that can transition seamlessly from the ocean to the office and look great doing both. It’s a no nonsense watch that has what it needs with nothing added that doesn’t serve a purpose. The finishing is some of the best I’ve seen in this price range, and I can even say it’s better than some watches that cost double/triple of what the CD-1 costs. 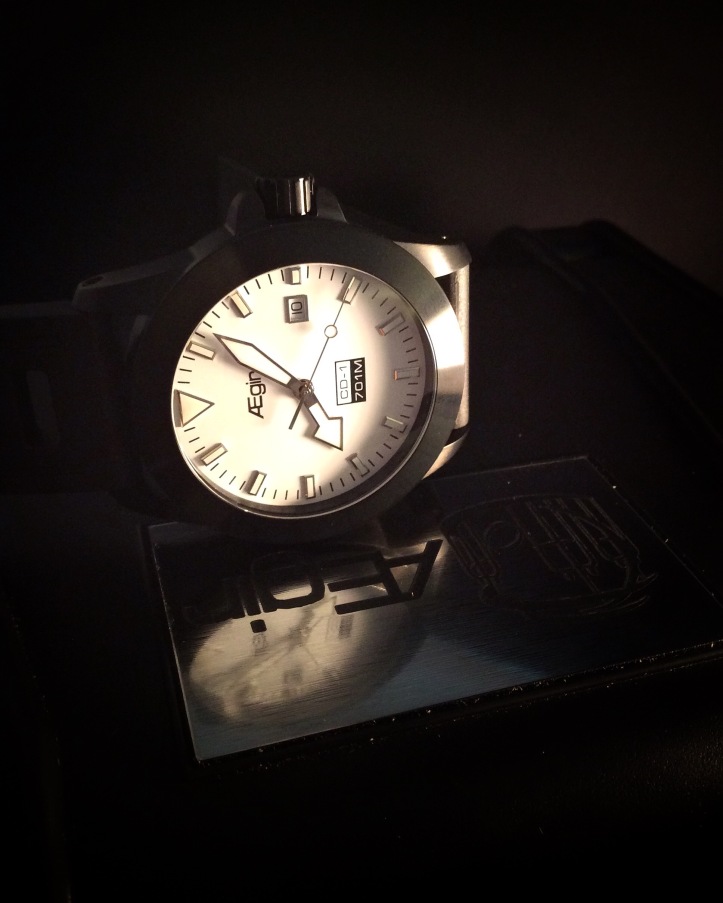 The dial is my favorite part of this watch. It’s extremely easy to read, the lume is great and the white just seems to glow on its on. My only nit picky gripes with the CD-1 are the lack of a unidirectional bezel and the exhibition case back. I understand a lot of people enjoy seeing the movement on their watch. On a dive watch I prefer a solid caseback which adds to the tool feel and less like a dress watch feel. 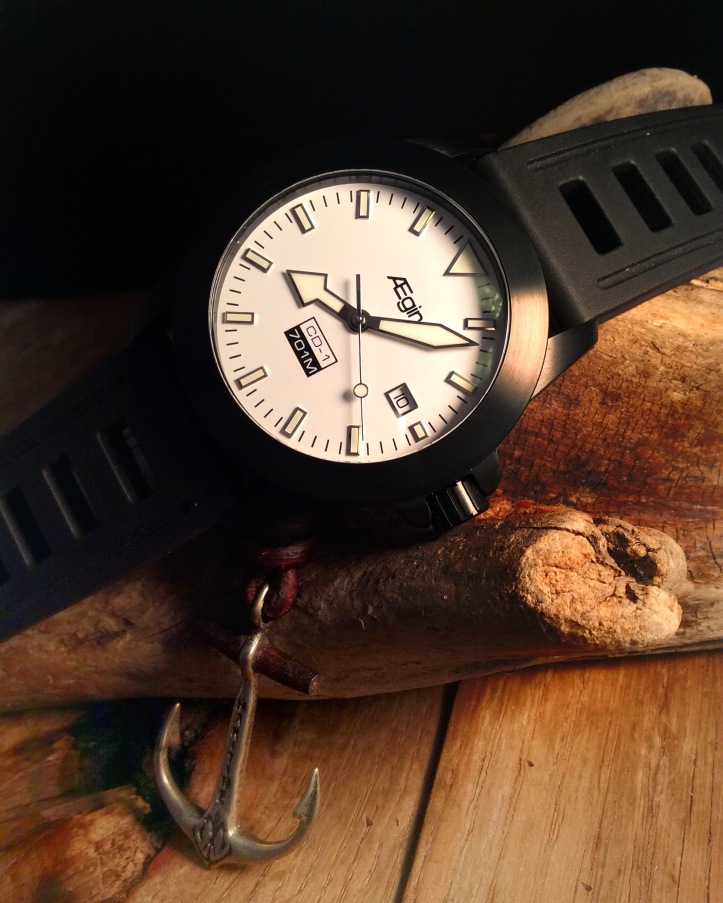 The CD-1 is a great choice for someone looking for the guts/soul of a dive watch but wants a more refined look that can transition to suit attire without fail or looking out of place. The DLC finish really adds to that look giving the CD-1 a stealthy look & feel. I definitley would recommend the CD-1 to anyone that’s looking for that next step in the world of dive watches or to someone who wants to start with a dive watch that is a step beyond the beginners level. It’s a well designed and executed watch that is finished with percision. You will not be disappointed.

I want to personally thank Todd for the honor and opportunity to review this watch. And thank you to all of you for reading. 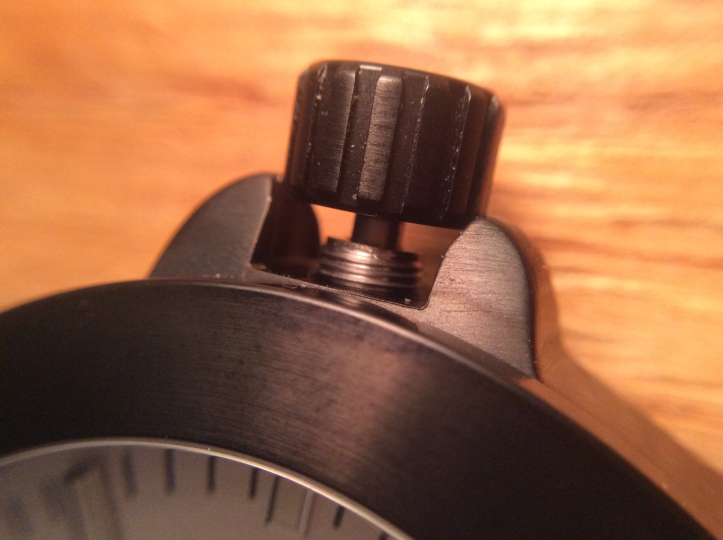 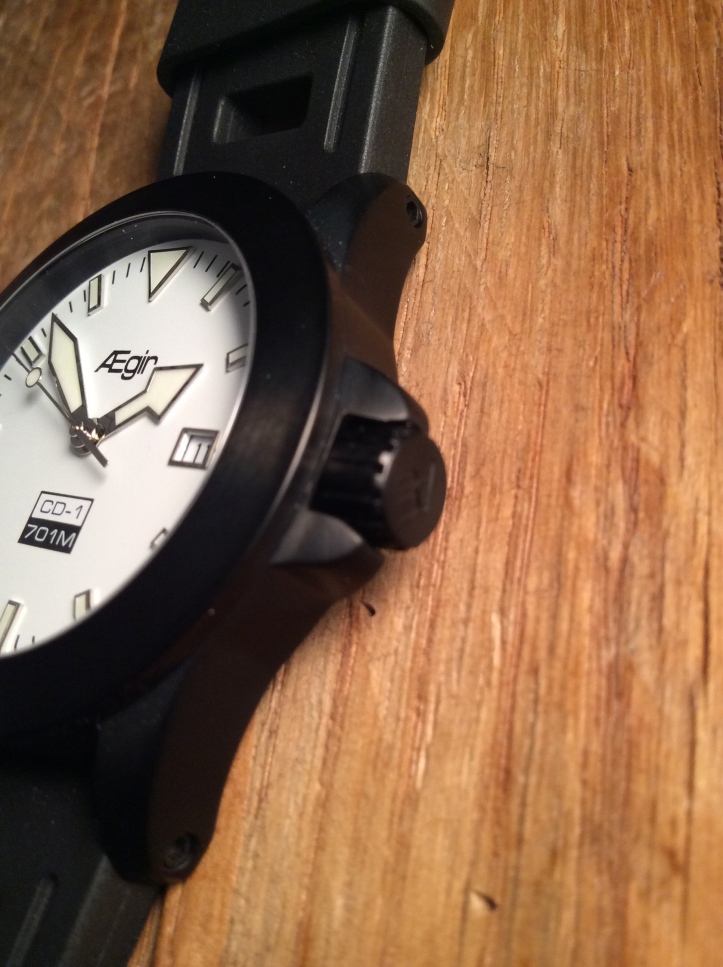 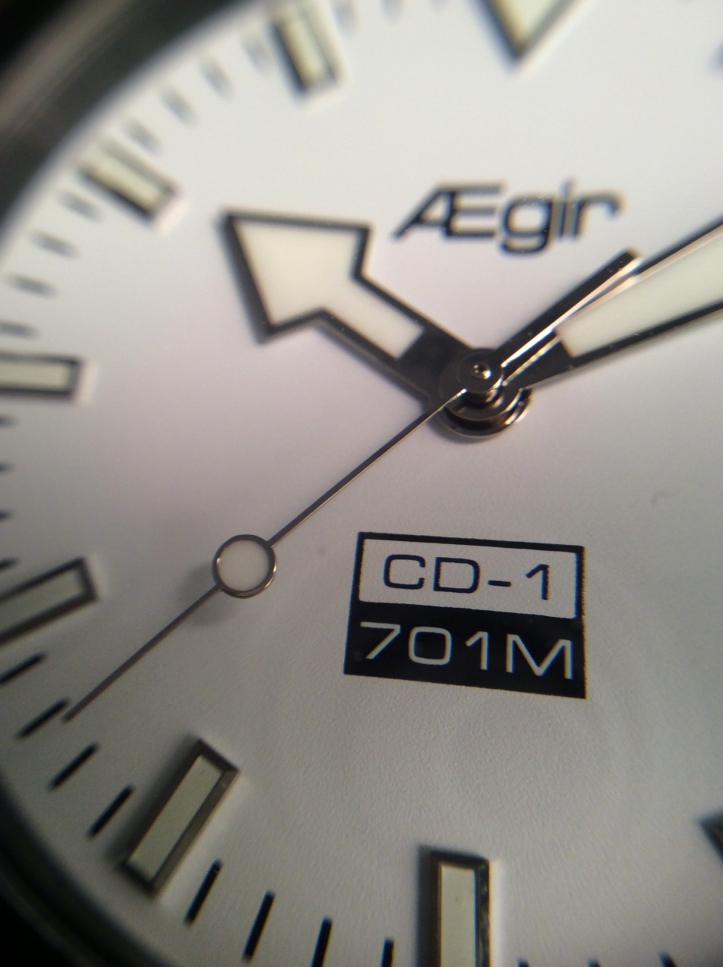