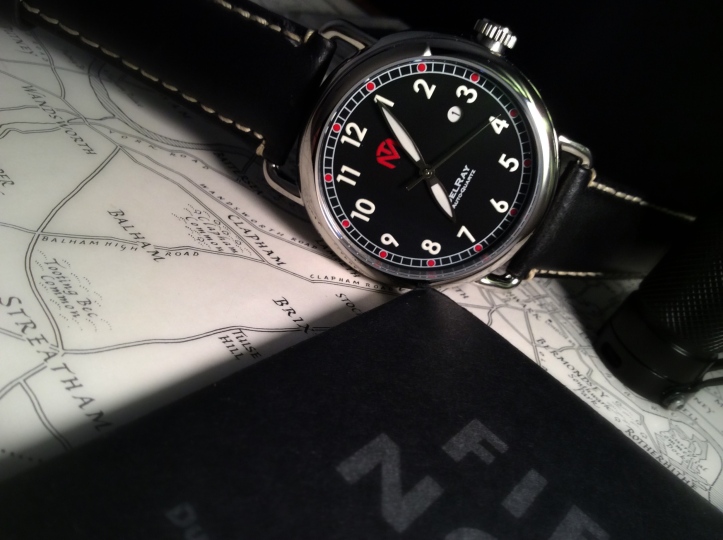 hy·brid
ˈhīˌbrid/
noun
1.
BIOLOGY
the offspring of two plants or animals of different species or varieties, such as a mule (a hybrid of a donkey and a horse).
“a hybrid of wheat and rye”
synonyms: cross, cross-breed, mixed breed, half-breed, half-blood; More
2.
a thing made by combining two different elements; a mixture.
“the final text is a hybrid of the stage play and the film”

The word hybrid is heard so often nowadays it has become part of our popular culture. Over the past few years there has been a big push in the automotive industry for hybrid vehicles. This is when hybrid really became used quite a bit. When I first heard McDowell Watches and how they used a hybrid movement it got me very intrigued. How can a watch use a hybrid movement? And what exactly is the way it is achieved? Well let’s explore the DelRay and find out together.

When I first opened up the DelRay packaging the word classic immediately came to mind. The style of this watch is classic. The 44mm polished stainless steel case is so classic. One of the first thing I did notice about the case is the welded/wire lug style which reminds me of the classic trench watches from WW1, which is what McDowell Watches was going for with the DelRay. A throwback to the iconic trench watches of WW1. The lugs allow the watch to wear much smaller than 44mm. McDowell took the classic trench watch and streamlined it with modern touches for the DelRay. In fact, the straps are removable because there are actual spring bars holding the black leather strap in place. The original trench watches either had a strap sown right to the lugs or the strap had snaps that you could unsnap to remove the strap. The black leather strap on the DelRay is nice and padded with some white stitched accents. There’s a traditional tang buckle done in polished stainless steel.

The rounded edges of the case and bezel just has that classic watch styling to it. Typically I’m not a big fan of polished cases, but it really works well on the DelRay. The signed crown operates by pulling and pushing it. It’s easy to grip for two reasons, it’s size and it’s nice edges. The case back features an exhibition crystal so you can see the unique movement inside of the DelRay. The first thing I noticed on the movement is the conducting coil, but also a rotor. This is where the hybrid movement comes into play. 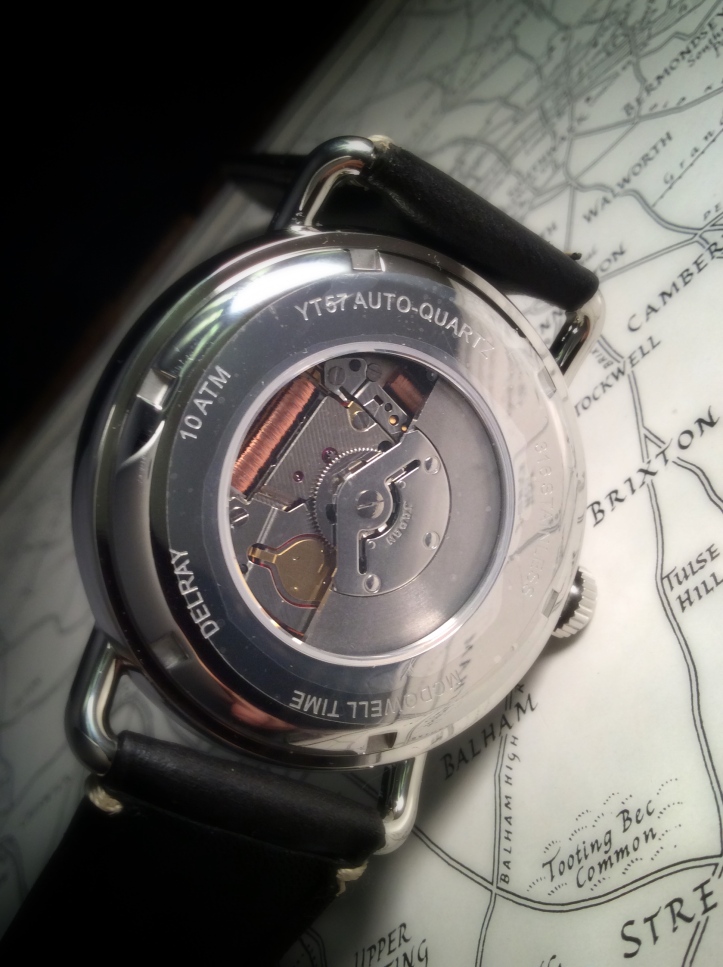 The movement is the Seiko YT57 Auto-Quartz. The automatic movement is the typical rotating counter weight/rotor but instead of the rotor winding a spring, the YT57 stores energy in a small capacitor. “This electrical energy is then used to power the quartz operation of the watch; which provides extremely reliable time keeping. This combination of rotation mass converting to electrical energy is a true hybrid approach.” McDowell’s website.  It’s a pretty cool feature if you ask me. It merges two watch worlds into one. You either love quartz watches or hate them, just as watches with automatic movements, the DelRay manages to bring both sides of the fence together. Maybe our politicians can take a cue from this watch. It’s actually awesome to see both movements merged into one via the crystal case back. I’m not much into exhibition case backs, but this is one movement I don’t mind looking at.

The dial on the DelRay is very classic. I love the matte black dial with the white Arabic numerals. The classic railroad style minute track printed in white with red accents just looks so crisp and clean. The red accents can be found at each hour marker. The hands on the DelRay are just as classic as the case and also match the case nicely because of the polished edges of the hour/minute hand. The second hand is completely polished without lume. The white center of the hands are coated with C3 Superlumi-Nova. The numerals on the DelRay also received some nice and even lume treatment as well. The McDowell logo is printed in red on the dial and is located just under the 12 o’clock hour marker. The other text on the dial is printed in white above the 6 o’clock hour marker and features the model name and ‘AUTOMATIC’.

The DelRay is a really nice offering from McDowell. It’s hard not to like the classic design. I’ve always liked trench watches. There’s a certain coolness factor about them. What also makes the DelRay cool is this the Auto-Quartz movement. This is my first experience with it. I had a WW2 flashlight that would operate in the same way, winding up to store power etc.. The nice thing about the classic design of the DelRay it can make the transition quite easily from the office to the weekend.  The original trench watches did look fantastic but remember what they were originally designed for, abuse!

I would have liked to see a screw down style crown on the DelRay, I believe it offers a bit more security against anything unwanted entering the watch. The strap is a bit hard from the get go and quite uncomfortable at first. It eventually loosens up some with wear. I would recommend the DelRay to anyone looking for a classic style watch that is very affordable. Affordable and offering a unique movement. It’s extremely comfortable and light on the wrist, so comfortable that you will forget it’s on your wrist. I want to personally thank McDowell Watches for the opportunity to review the DelRay. Thanks for reading! 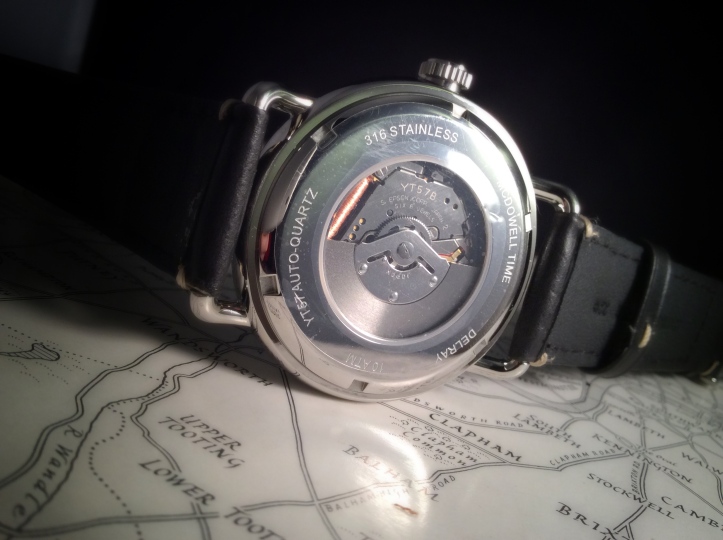 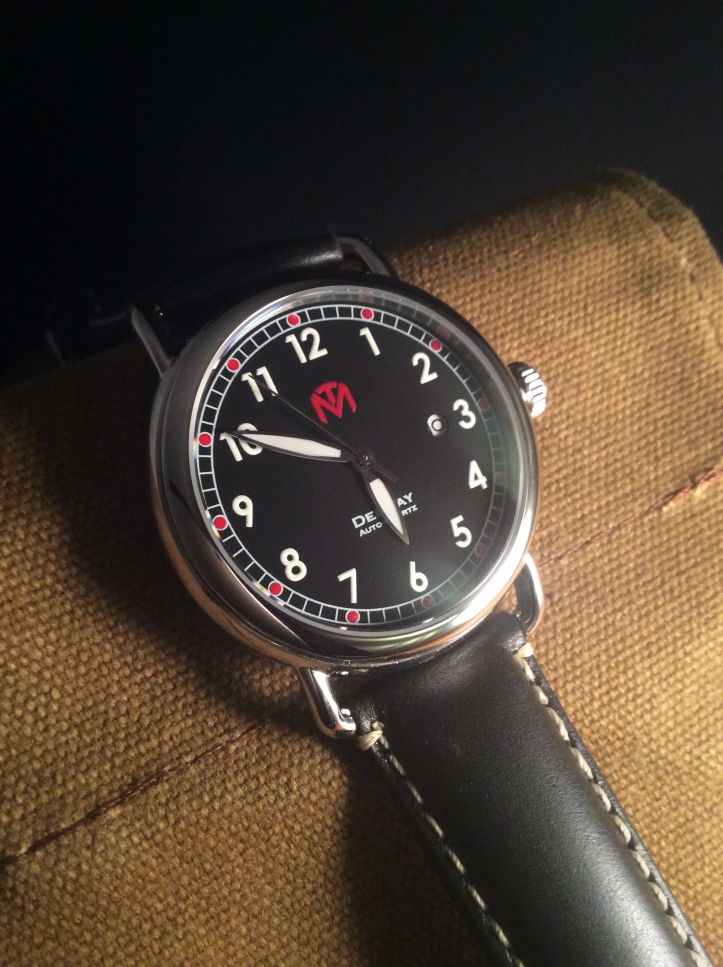 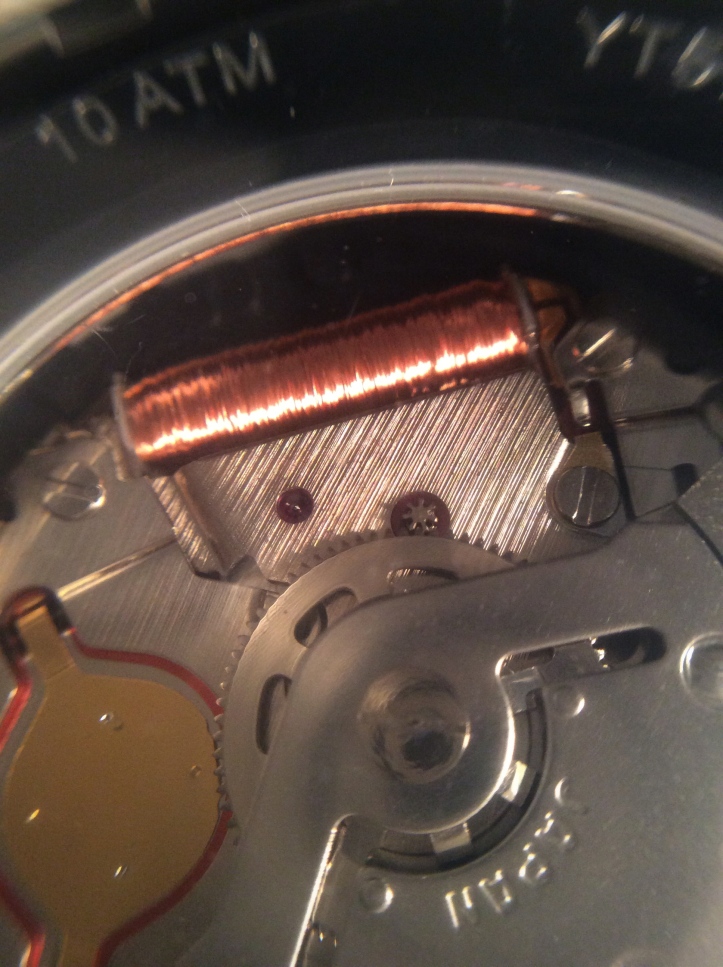 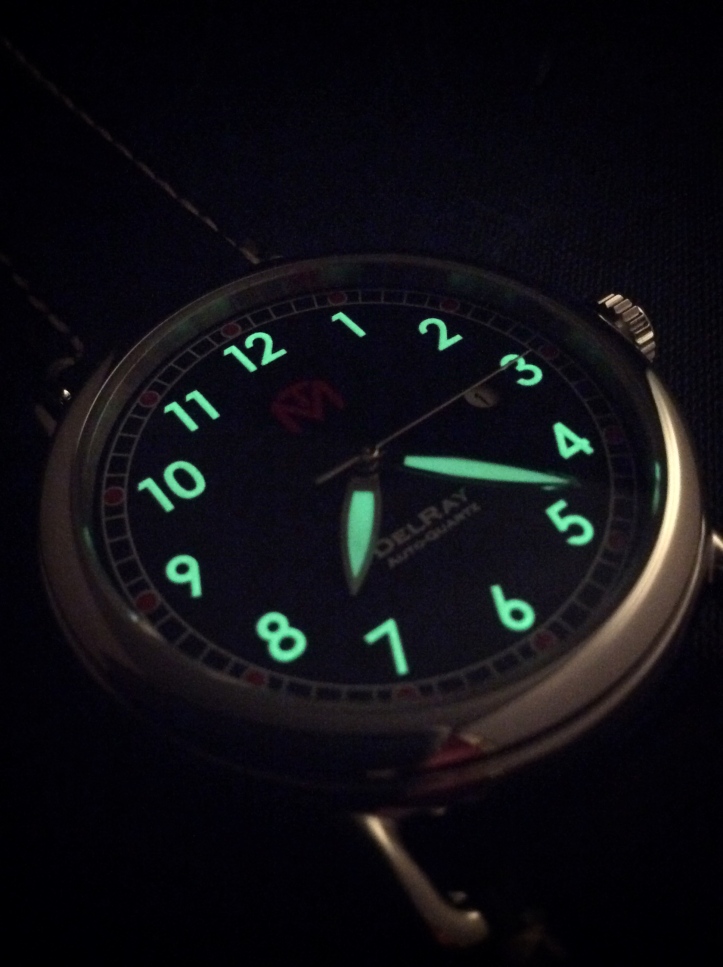 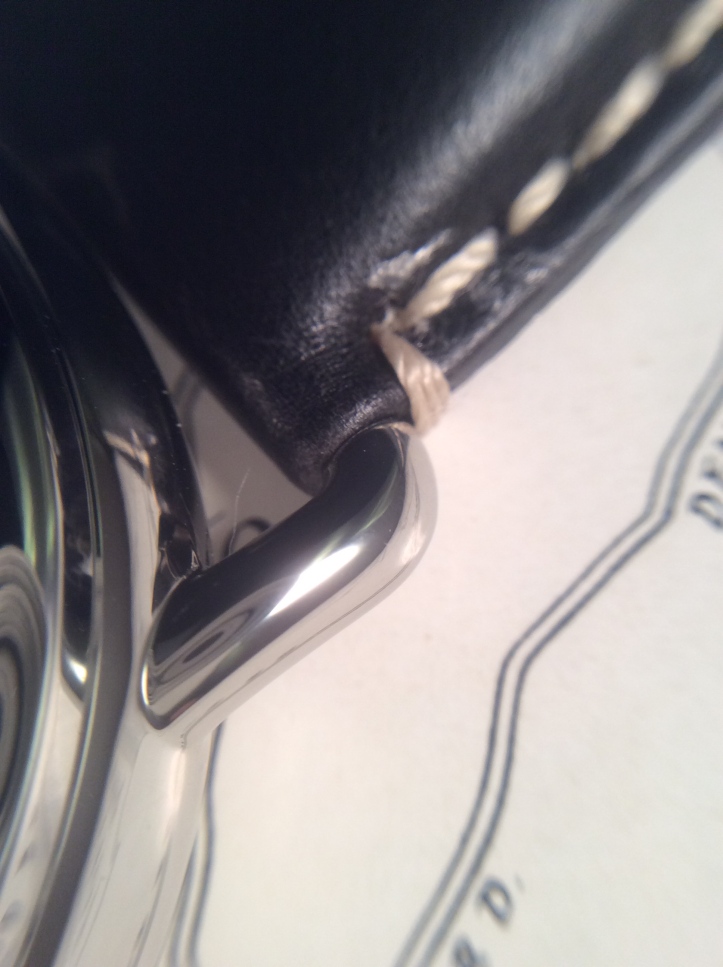 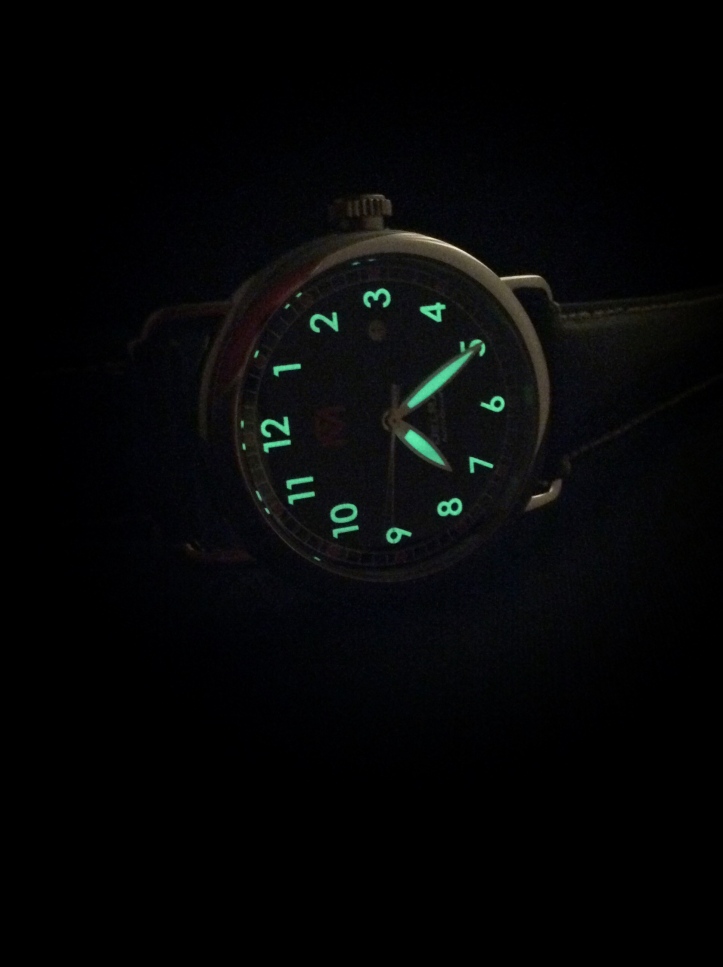