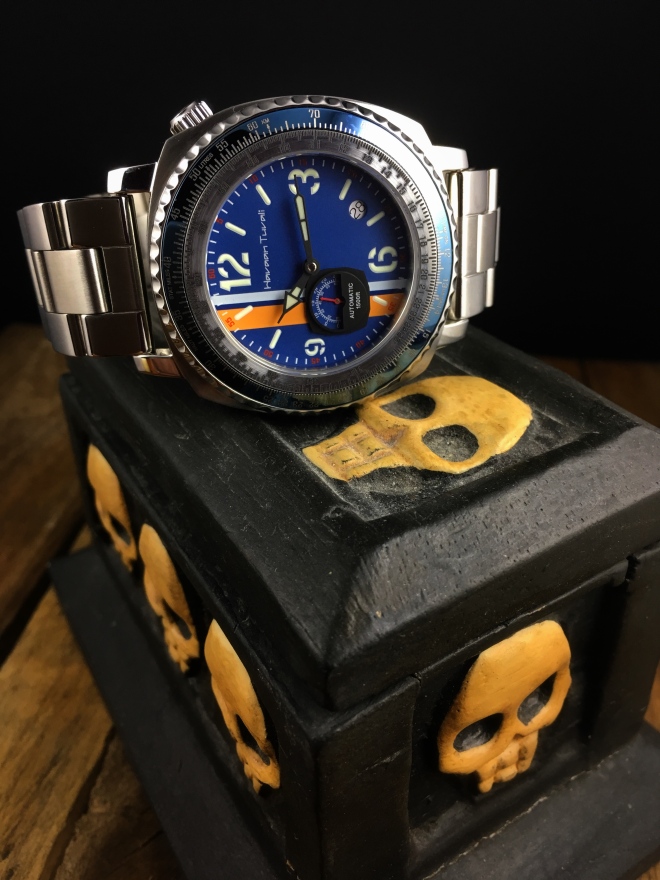 Marching to the beat of your own drum can be a hard thing to do these days, especially when it comes to offering a product to the public. A choice has to be consciously made, do I go with the flow of the stream or do I fight the currents? Even with my blog I have to ask myself this with every review. I can remain with the same style where I am comfortable or I can try to evolve, trying new things that may not work. Will I succeed or not? It is a choice that is hard to make. That is one question that Eric Yeh, the man behind Havaan Tuvali asked himself when he started his venture.

“The original plan for my first model was to design a diver’s watch, and I was traveling around the country seeking inspirations.” He was in the beginning stages of designing a watch which is something he wanted to do both on a personal level and a professional level.  Eric said “The idea was to create a watch that’s completely different than any mainstream watch brands and I wanted to have sub seconds on it.” He was inspired the day he took a trip to an Aviation museum.  Laying his eyes upon a model of the first amphibious airplane used by Taiwan military, the PBY-5A Catalina. He was instantly inspired when he was doing his research and saw the plane’s cockpit. I later did some research on this plane and saw this old picture of the plane’s cockpit, Eric really wanted a dial on the watch that featured a small seconds gauge. “I haven’t seen one that’s half enclosed like an amp meter or fuel gauge, and the patent sub second display was created.” 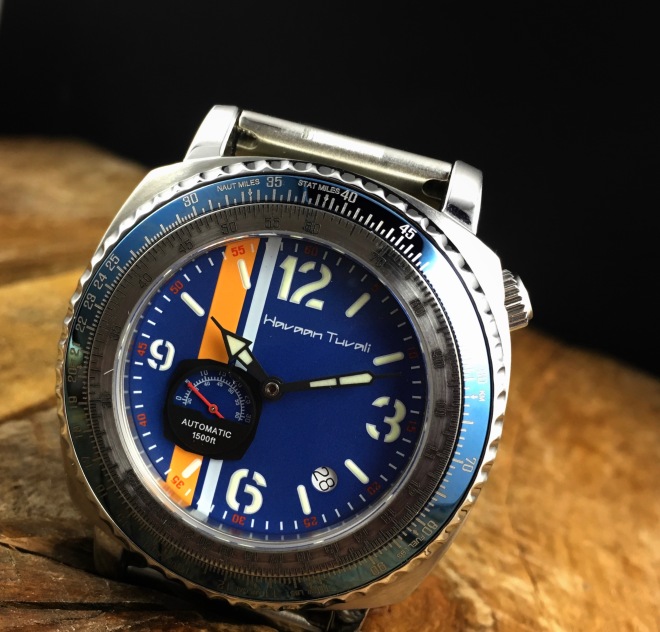 The dial is what did draw me in to this watch. I was instantly intrigued by the small seconds gauge on this watch. Located on the dial at the 8 o’clock position. It does in fact look straight out of a planes cockpit. Encased in a black, with 0-30 visible printed in white text semi circle. It looks fantastic and is the focal point of this dial. Now I say that only 0-30 seconds are visible and that is what I initially thought, but as I spent more time with this watch I discovered that 30-60 is also printed just under the semi circle. I love that Eric included this on the small seconds dial. Another detail that I love is that Automatic and 1500ft is printed on the ‘instrument gauge’ of the small seconds, which creates a cleaner overall look on the dial. Keeping track of the seconds is a small red arrow tipped hand. It is very small, but the red color makes it easy to see/read. 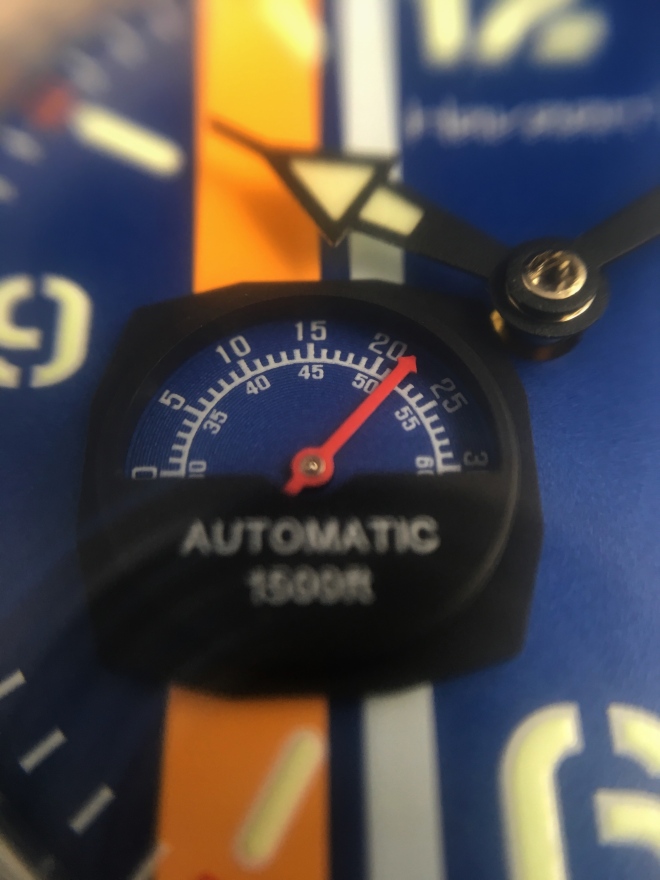 Running behind the small seconds gauge are two stripes, an orange and a white stripe. “The color stripes are controversial I will admit, but I wanted to have a little fun with the dial design, since this is my watch, why can’t I make it the way I like it, otherwise what’s the point of starting my own brand.” I agree with what Eric said here, it is very commendable when someone takes a chance with something they believe in. The stripes look great, especially being set against the matte blue dial. The military stenciled numerals on the dial really add to Eric’s vision and you can see that it was inspired by a military plane. Another detail that took me a little while to discover is how uniform Eric keeps the color sequence on the Squadron One. 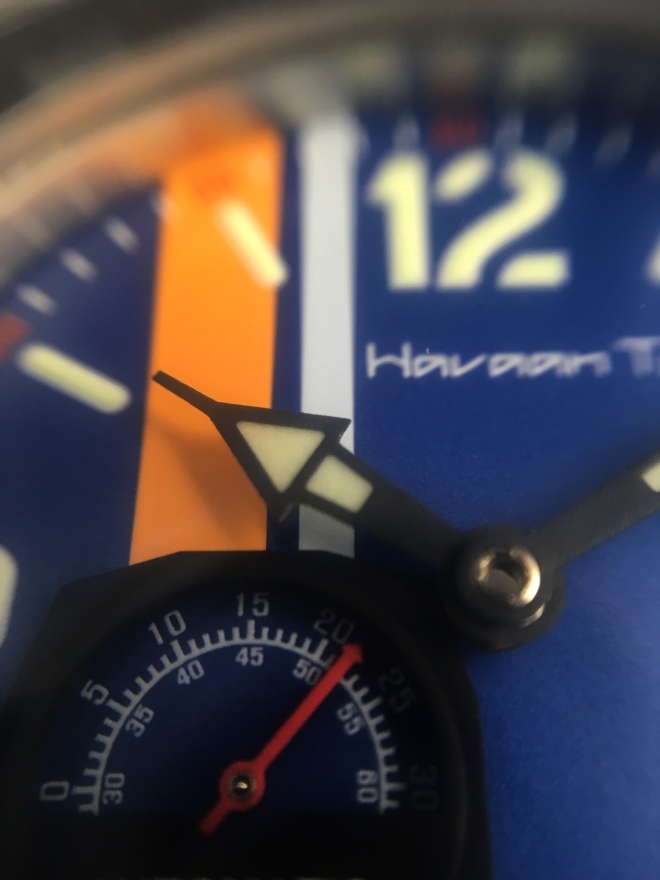 The hand on the small seconds is red & the numbers are white, the hour markers are white, while the minutes are printed in red. Little attention to details like this are what I find fascinating on watches. It shows that the desining process was well thought out and planned. This is also apparent when you look at the size of the 9 on the dial. Instead of completely eliminating the 9 which I think would take away from the overall flow of this dial, Eric decided to keep the 9, but made it smaller in order to place the small seconds gauge.

There is a date window located between the 4 & 5 o’clock position. The date window is very legible with the white date wheel with the black printed text. The hour and minute hands on the Squadron One were something I initially struggled with. One of my pet peeves on a watch is when the hands appear too small in relation with the size of the dial. Now the hands shape are beautiful which are a nice combination of modern and vintage. Vintage because you can clearly see the cathedral style influences and modern because of the arrow tip of the hour hand. The matte black and white combination are also lovely. To finish off the details of the dial you certainly can’t just have a dial that in exclusively visible in daylight, you have to give nighttime it’s dues as well. 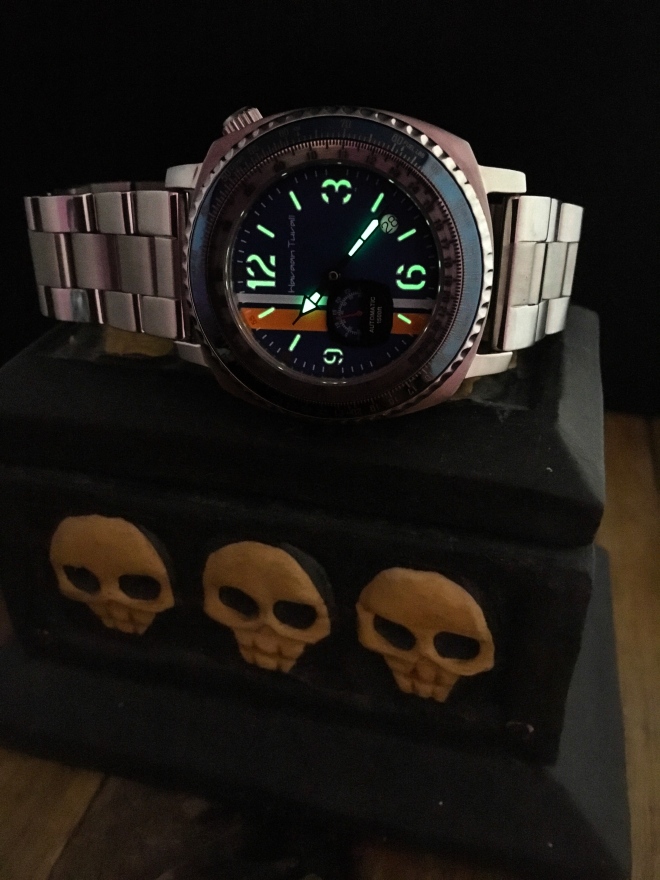 Getting back to my issue with the size of the hands, the more I studied this dial, it became quite apparent that the hands are perfectly sized. The hands are not intended to be the focal point of this dial, like I mentioned earlier the small seconds gauge with the stripes behind it are intended to be the Squadron Ones focal point. I believe that this dial is rather daring and Eric really took a gamble on it, but it absolutely works in every way. It is really stunning in person and especially when it is on your wrist. The stainless steel bracelet helps the wrist pressence of this watch as well with the combination of polished and brushed finish. 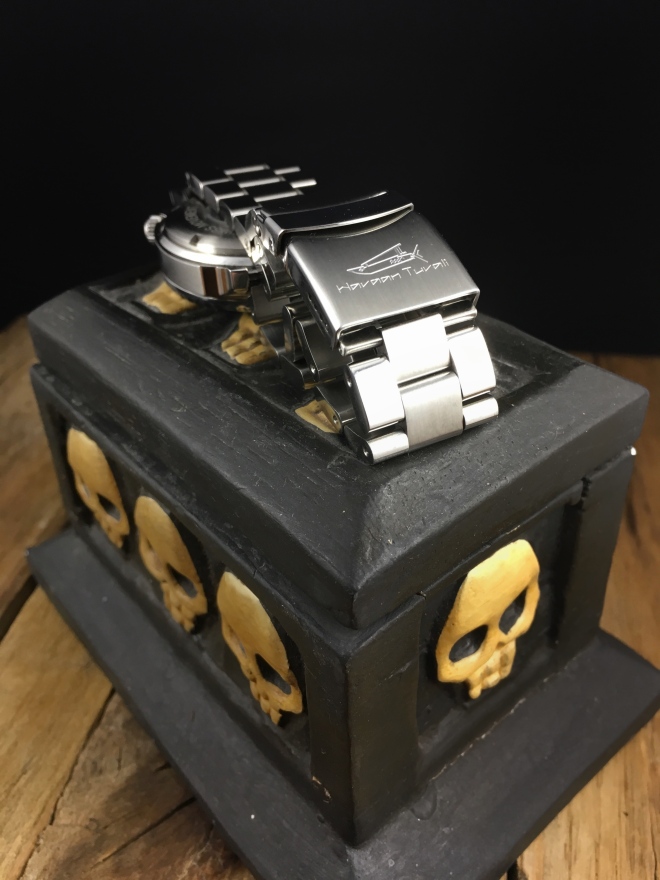 The buckle features a nice engraving of Havaan Tuvali’s logo. The links are nice and thick which creates a feeling of quality rather than a just a cheap standard bracelet. Sizing the bracelet is quite easy because of the flathead screws are easily accessible and with the included screwdriver removing them are a breeze. If you have trouble getting to fit just right don’t worry because there is a micro adjustment within the deployment clasp/buckle. The bracelet brilliantly matches the case of the Squadron One. Carrying on that nice combination of brushed finish and polished finish. 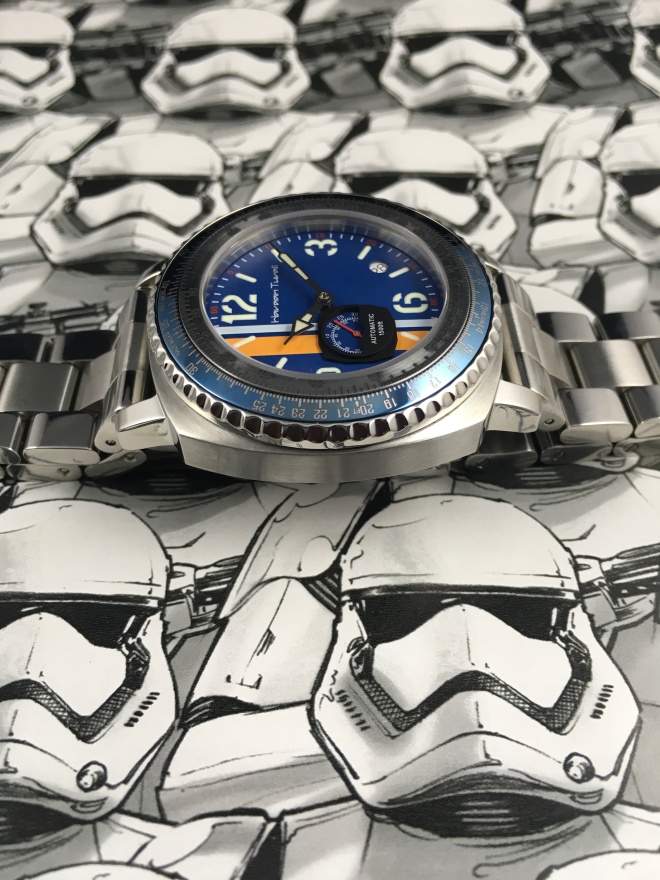 The square shape of this watch balanced by the rounded edges is a lovely combination of ruggedness and beauty. You will notice the size of the lugs and how their size plays a part on how the Squadron One wears on the wrist. Shorter lugs with less wrist overhang equals a watch that wears smaller than the 44mm measurements imply. What also helps the comfort and fit of this watch is the crowns size & location. The screw down crown is located roughly between the 1 & 2 o’clock positions on the watch. You definitely won’t have to worry about the crown digging into the back of your hand and don’t worry about the operating of it either. This crown is quite easy to grip and screw/unscrew. I was worried because it is smaller than most crowns that I am accustomed to. The stem on the crown does come out quite far when its unscrewed and pulled out to the farthest position. The crown is nicely signed with a etched plane. Nice touch.

To finish out the tour of the case from the front and sides, the bezel is definitely a highlight of this watch. “To make it a pilot’s watch, I designed the bezel with slide rule function.” Not only does this add to the pilot watch inspiration of this watch, but it also gives the Squadron One a tool watch function. The bezel glides as you turn it in either direction without making a sound. So not only does it operate smooth as butter but that blue is just beautiful. There is also a tough detail about the Squadron One’s case, and that is the 1500ft water resistant rating. Pretty impressive for a pilots watch and a detail that I am sure stems from Eric’s original vision of doing a diver watch. 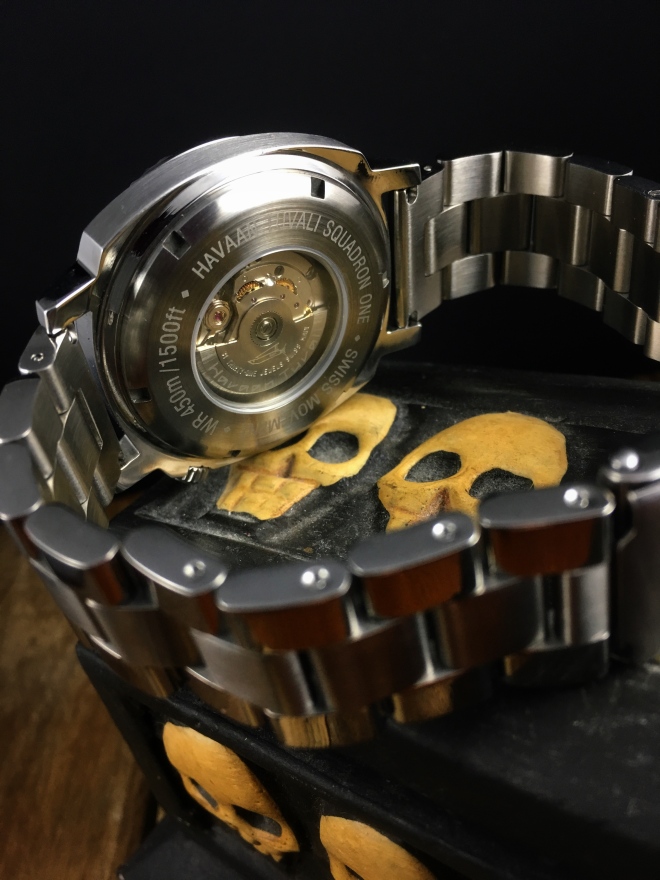 Turn the watch over and you will see two things, an exhibition case back and the Swiss Sellita SW290-1 automatic movement. The swiss Sellita movement beats at 28800 A/h (4 Hz) frequency and has a decent 38 hours power reserve. My timing of the Squadron One came out to be +\- 15 seconds per day. I like that there was some added detail to the movement as well. The self winding rotor is decorated with Havaan Tuvali name and logo. Another nice touch.

What I like about this watch’s design is the take that Eric decided to take on his interpretation of a pilots watch. I love the look of vintage pilot watches, who doesn’t right? But Eric made that conscious decision to fly against the normal wind currents and fly his own unique route, and by doing so he created something unique, something refreshing, something that I think is nice in both design & execution. I can really respect what Eric has down here.

You get a very nice little package for $399 USD. What exactly do you get? A nice wooden storage box, a steel bracelet, a leather strap, a tool and of course the Squadron one watch. This is the first offering from Havaan Tuvali and it is impressive. I have to recommend this watch to someone who has been looking for a pilot watch, but one with modern touches, that thinks outside of the box. It is a perfect watch for that individual that like to march to the beat of their own drum and want to express their individuality.

I want to personally thank Eric for allowing me the honor to explore the Squadron One.

Thank you for reading and as always your comments/questions are welcome below. 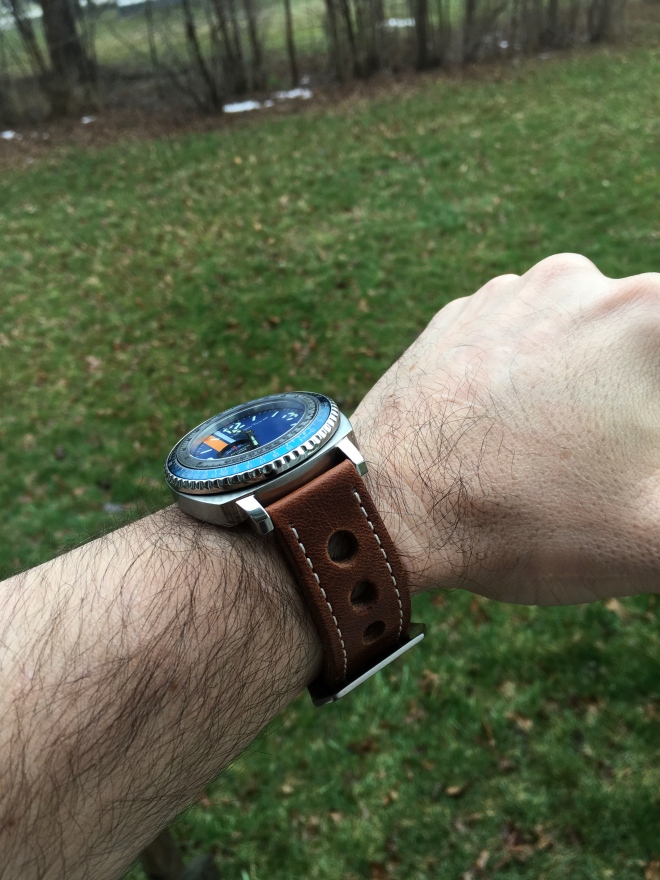 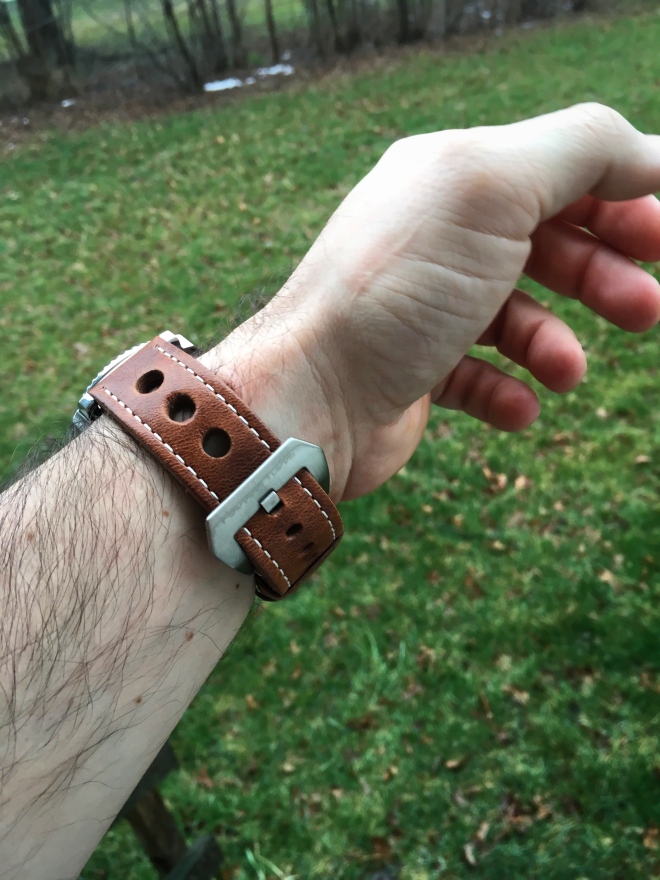 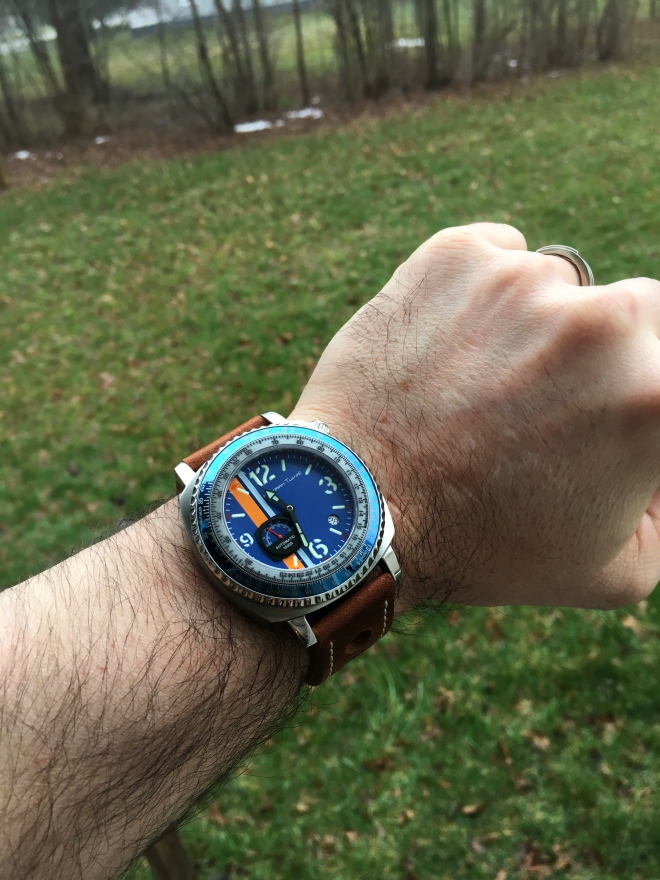 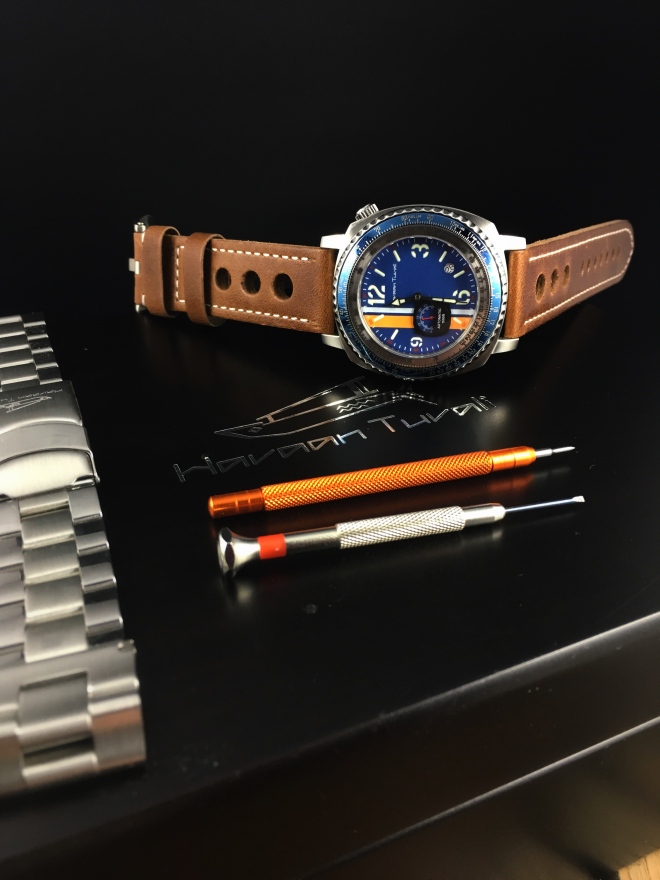 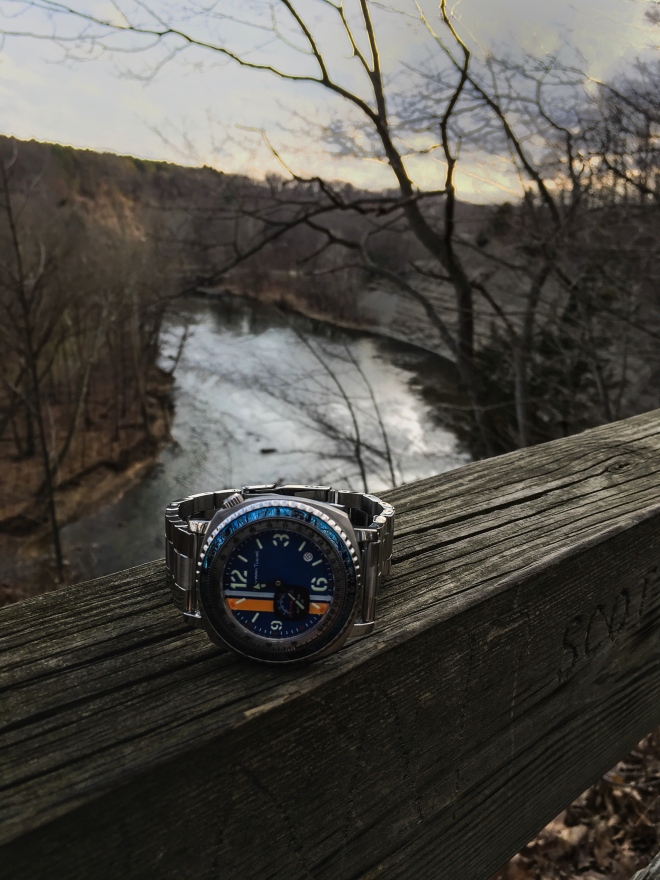 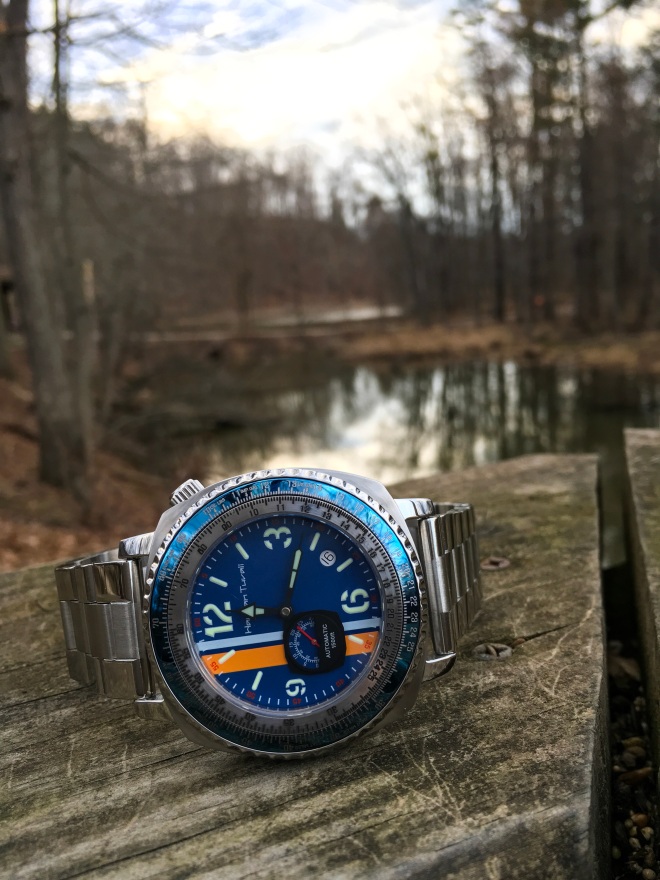 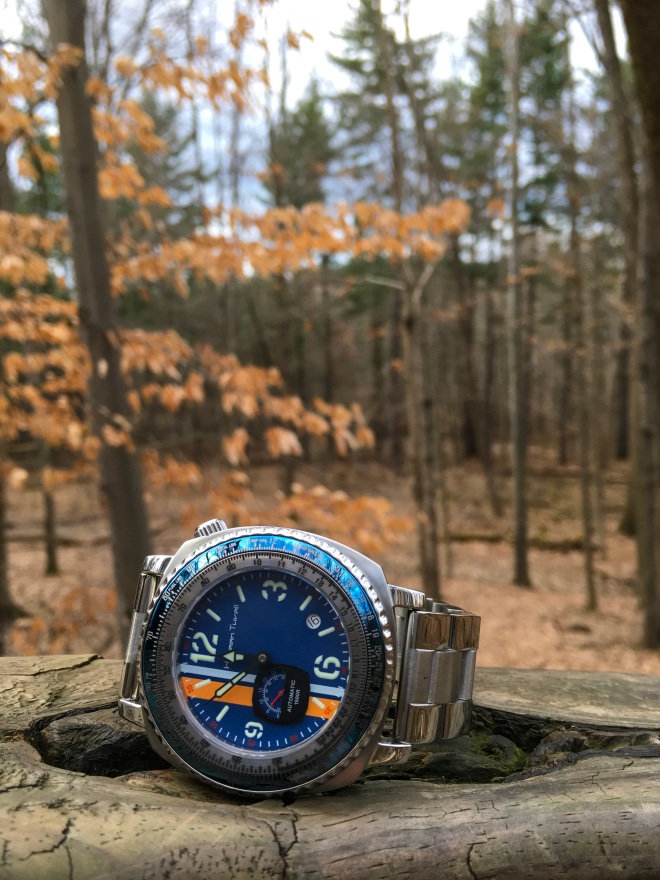 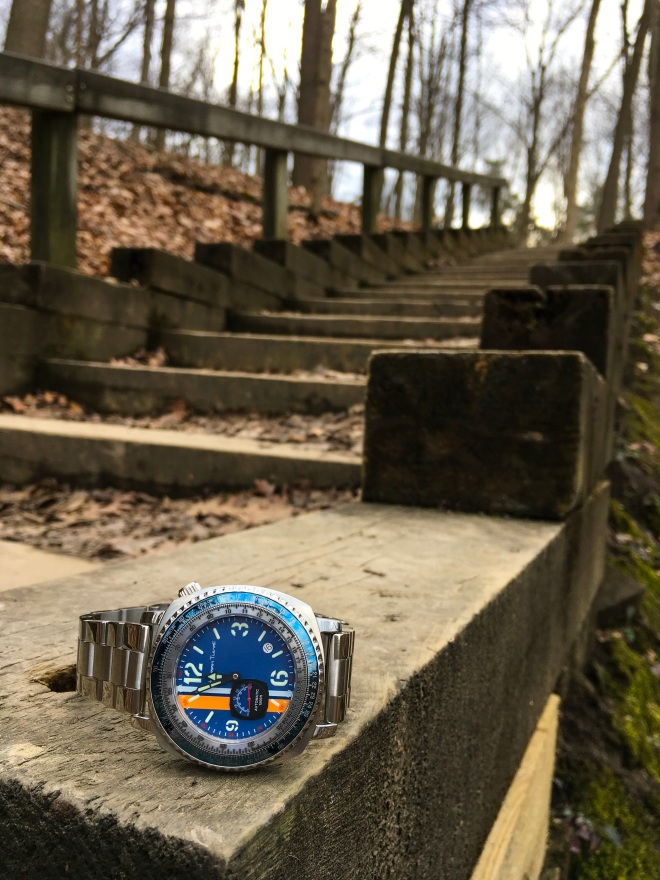 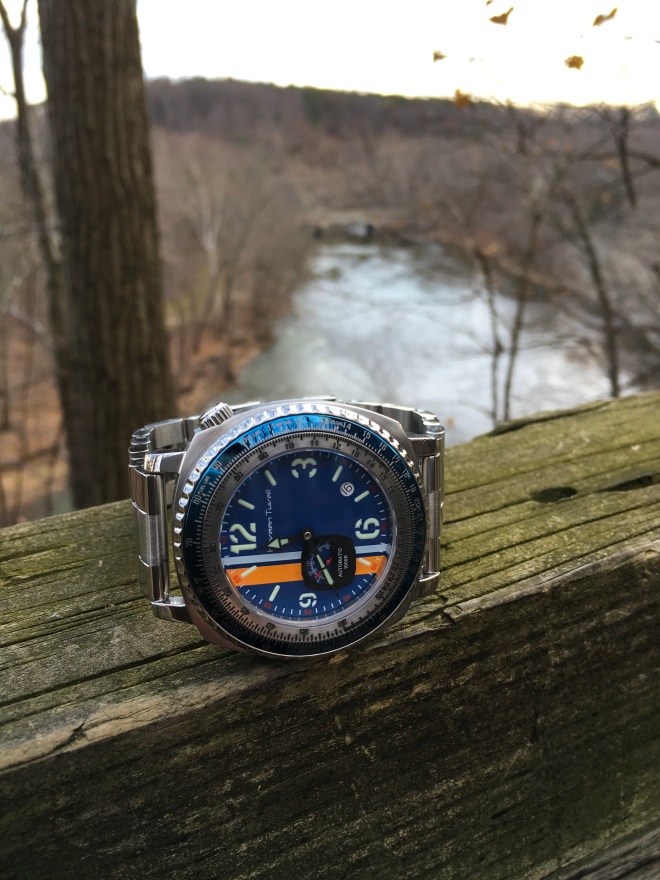 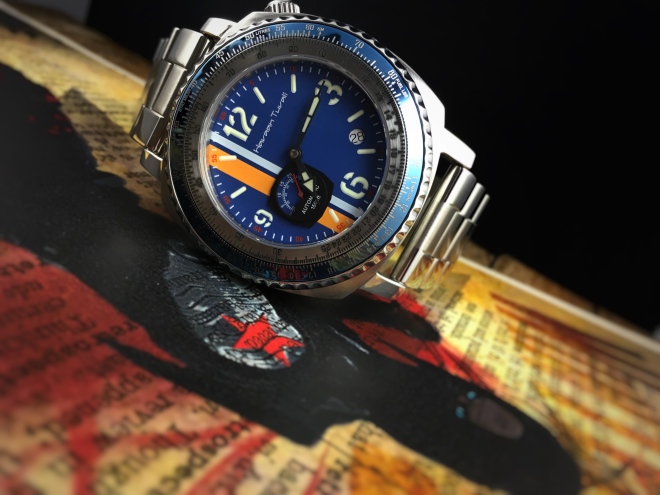 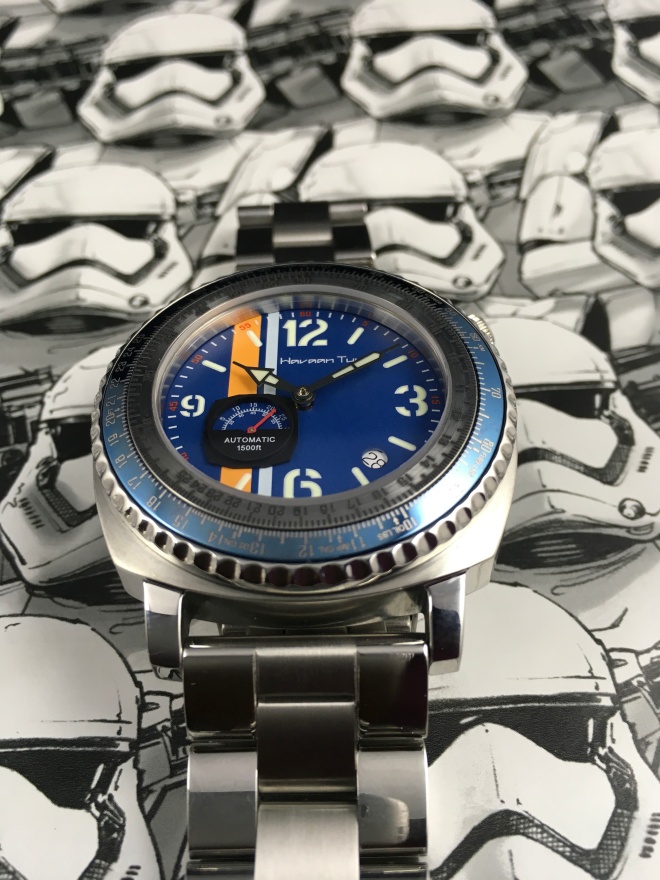 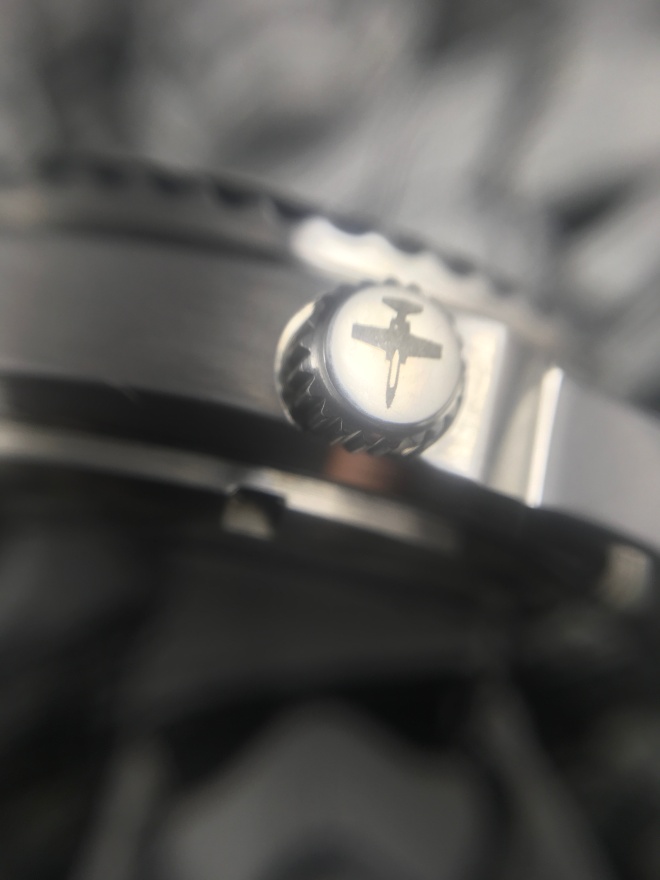 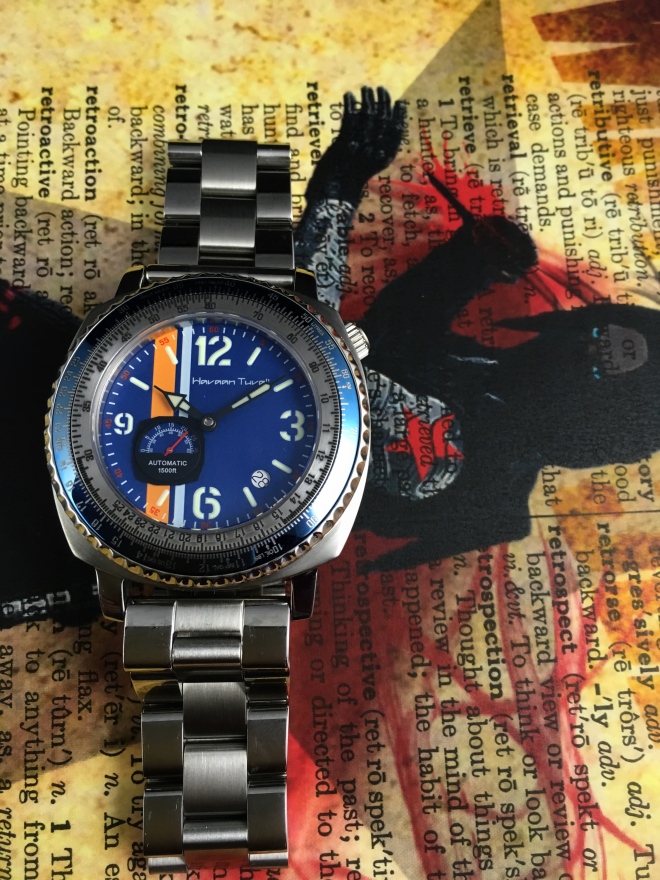 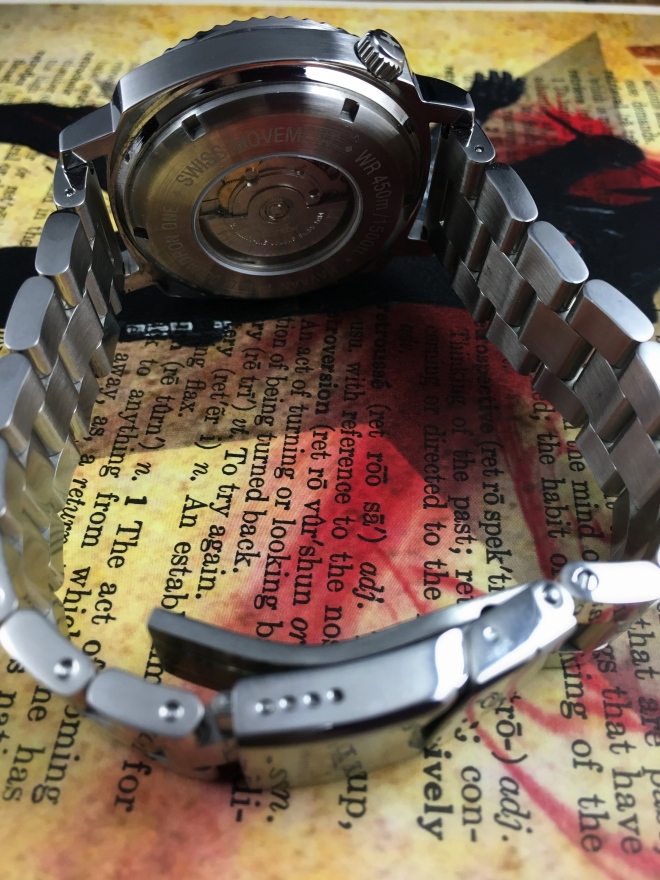 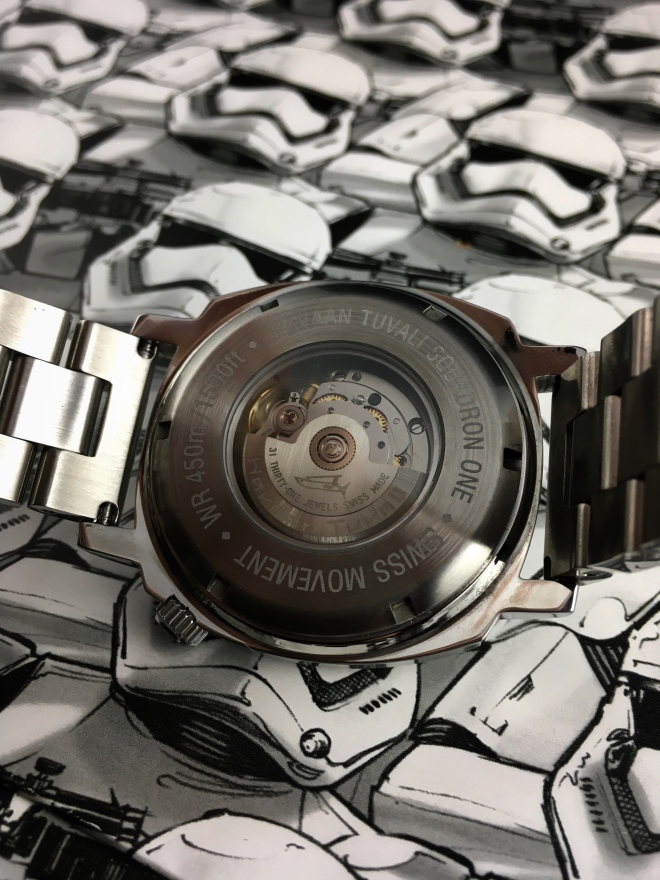 I fell in love with watches when I was a small child and I would listen to my grandfathers pocket watch ticking. It's been an obsession ever since. Dive watches are my true love. I've been actively involved in the watch universe for over 15 years, trying to contribute what I can, where I can. Spreading my knowledge , but more importantly learning new things from other WIS. Thanks for looking at my blog. If you have any comments or questions, please feel free to contact me. Follow the blog via Facebook https://www.facebook.com/TimetoBlog-Watches-473321089483105/?ref=aymt_homepage_panel and on Instagram https://www.instagram.com/stephen_tuffatore/ View all posts by Stephen Tuffatore